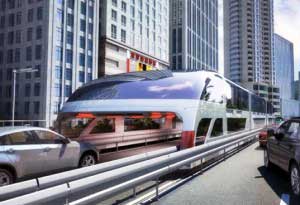 In 2010 TBS, ( A China based company) designed a vehicle that rolled over traffic. Recently, it proposed a video of a B concept that is longer than the initial one but very attractive for the eye. The Land Air-Bus aims at diminishing traffic in cities. It uses the main structural roads of a city. The installation of the Land Air-Bus needed infrastructure is facilitated, easily built on the existing road structures.

Many obstruct the qualities of the concept arguing trucks and buses will not be able to pass through the LAB. Others advance that reorganizing traffic rules will be largely too complicated for the common driver, pedestrians. Although, some of the above may be true, the LAB concept, not new from a strict technological standpoint, has many qualities. It will be cheaper than digging for a subway, metro line. It will be maneuverable as it appears flexible and light. Overlay stations may be numerous and built at a reasonable cost. It uses the actual infrastructure and minimizes expenses. It seems to be a fair replacement for a Tram vehicle directly operating at vehicle obstruction level. We are being told every day that cities are growing in population and in numbers as well. This demographic tendency is not seen to stop for a couple decades ahead. Circulation, massive congestion, are unproductive and costly. Knowing all that, will the LAB win its bet. Is the concept sufficiently good to be adapted and be launched somewhere in Sao Paulo, Mexico, London, Paris, Delhi, Shanghai, Los Angeles or New York? Many answer Yes to that question. And you? Do you see the Land Air-Bus good enough to give it a try? To be purchased by city authorities in the World ? Can the LAB win a clear responsibility beside actual transportation systems in our cities, soon ? Contribute. Give your opinion.